UFC Vegas 9 weigh-ins got a little heated earlier today. A major story leading into this weekend was the beef between Michel Pereira and Zelim Imadaev.

Both men are scheduled for a welterweight bout Saturday at the UFC Apex in Las Vegas.

When both men met, their emotions got the best of them. During the weigh-ins, Michel stared Zemlin down and the unthinkable happened.

The altercation was brief and probably could have been avoided.

Take a look at the video below.

UFC President Dana White admitted he’s getting older and would usually break up a scuffle.

Fortunately, the altercation did not escalate further and Pereira did not make an effort to retaliate.

“I’m getting old guys, that was a quick one, that was on me,” White said after the weigh-ins. “They started getting aggressive, going toward each other but I didn’t think it would escalate to that, that quickly. I blew it. This is the fight game man, that one’s on me. I apologize, I shouldn’t have let that happen.”

Pereira will now get a chance to exact his revenge tomorrow. He faces extra pressure after suffering two losses in a row.

Pereira has become must-watch tv and is known for his flashy style, combining acrobatic moves such as somersaults and backflips to flying knees and punches. 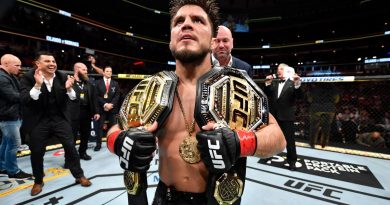 Henry Cejudo will only come out of retirement for another belt