Tyron Woodley found the best training partner you could ask for to prepare his for his upcoming fight against Colby Covington.

Jorge Masvidal is now apart of the Woodley training camp to assist him ahead of his big fight, which takes place Sept. 19 at the UFC Apex in Las Vegas.

The beef that both Woodley and Masvidal have against their former American Top Team teammate Covington has taken a new level. It has gotten to the point where Masvidal has decided to spend time in St. Louis to help Woodley to defeat Covington.

“I started training with him. He came out – he had such a good time,” Woodley told ESPN. “He said, ‘You know what? I’m going home for a day or two, and I’m coming back out.’

And he came back out and we just – iron sharpening iron. But what people don’t know about me and Jorge, I trained with Jorge five years straight before when I first joined ATT and he was at ATT. We trained hell on wheels.”

Woodley is confident and credits Masvidal for pushing him and helping him get in the right mindset as he enters the grudge match with Covington.

Woodley knows he needs to beat Covington as he has lost two in a row and the bad blood between the two men continues to brew.

Woodley has switch training camps and hasn’t trained with Masvidal for a while but has remained friends with him.

“I’ve always been American Top Team, and I’ve always supported Jorge,” Woodley said. “If you go back and look at the last two or three years, you’ll see me giving Jorge credit and being happy for him genuinely that he’s finally making the money.

So when he did that and reached out, I said, ‘Hell yeah, let’s get him in.’ He’s holding me accountable. He’d be like, ‘Can’t do that – you’ve got to do this … tonight we’re doing this … let’s go get in the sauna … how much you weigh?’ We both came from the gutter, when you really think about it, and we both found a way to stick with it. 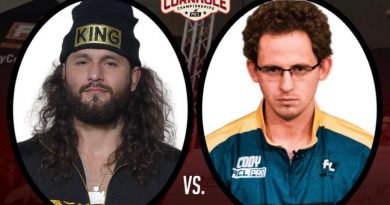