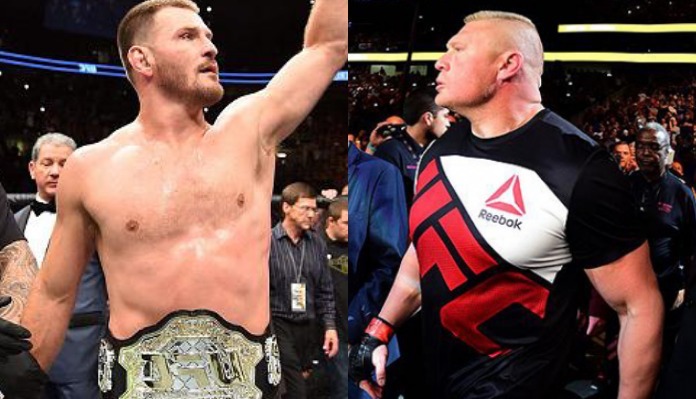 Stipe Miocic is the current ruler of the UFC heavyweight division. Stipe rarely calls out fighters but if Brock Lesnar does decide to return to the octagon, Miocic is calling first dibs.

Miocic appeared on a recent episode of Michael Bisping’s Believe You Me podcast and was asked who he wants to fight next.

At the moment, Miocic is open to all options and doesn’t have any particular matchup in mind.

If it were up to Stipe, he would have the right to call his shot against Lesnar.

“A hundred percent I think so,” Miocic said. “Listen, I just think about it more and more I do think 100 percent if anything I would get the Brock Lesnar fight first or be asked first. I didn’t know [Jones] called the shots. I didn’t know that.

Another option for Miocic would be a rematch against Francis Ngannou. If the matchup does materialize Miocic explained the game plan he would have going into the rematch.

“I would say you go back to what works but you also understand that he’s gotten a lot better since the last fight, so you’ve also got to incorporate new things,” Miocic said. “That’s the way the game is. Honestly, if you take time off from this sport, people evolve so fast and they get so much better that they’ll leave you behind.

“You take a little bit from the last fight I think. You don’t want to dwell on it because that person’s gotten way better and they’re working on things that you did well against them. I think you do a lot more different things, maybe change it up, the things you were doing. The takedowns, maybe a different setup to get it there, or maybe this time I finish him with a rear-naked instead of laying on top of him like everyone thinks I did.”

Miocic is not the kind of guy to trash talk or toot his own horn but he is comfortable making a case for himself.

“It’s all they talked about the whole week,” Miocic said. “It wasn’t like, ‘Are you ready for the fight?’ They’d be like, ‘If you win this fight are you cemented as the greatest heavyweight?’ So I mean, apparently I am because that’s what everyone was talking about.

“Listen, I just want a good legacy. Not so much for the fighting part, but for my daughter and if we have more kids. I want to show them, listen, your dad worked hard for what he wanted and he got it.”

“I will fire you”- UFC President Dana White breaks silence 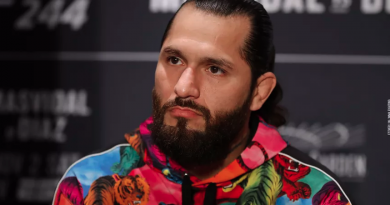