The main event ended in devastating fashion. The UFC flyweight was on the line in a rematch between Deiveson Figueiredo and Joseph Benavidez. Deiveson established his dominance early and submitted Benavidez in the first round.

Figueiredo is now the flyweight kink. UFC President wants Figueiredo to defend his title but Figueiredo has other plans.

“I’d like to have a fight at 135, you know?” Figueiredo said. “I’d like to be the guy to bring Cejudo back from retirement. I think he was looking for a worthy opponent, and I’m that guy. I’d love to move up and be able to fight him at 135.”

In the co-main event, top middleweights clashed in a short but exciting fight. Jack Hermansson caught Kelvin Gastelum in a heel hook and submitted him in just 78 seconds.

Following the fastest loss for Kelvin released a statement on social media.

Truly embarrassed guys. I’m sorry. My team, my family @UFC @danawhite @Mickmaynard2. I’m much better than what was shown tonight. Thanks to all my family , my team and my friends for the ongoing support. I love you all.

You may encounter many defeats, but you must not be defeated. In fact, it may be necessary to encounter the defeats, so u can know who u are, what u can rise from, how u can still come out of it.

Now the UFC has a top middleweight ready for a title shot and a new flyweight champion. 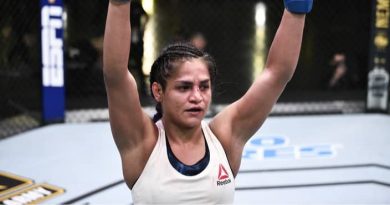 Will Michael Chandler end up in the UFC after Bellator 243?